A bit tardy, Google is but it’s all good on our part. In all honesty, we (and the rest of the human race, probably) were too much indulged in the announcing of the 4.4 build, Google’s partnership with Nestle, the huge KitKat statue and the alleged Nexus 5 spotting. But nonetheless, the numbers are here and we’re sure happy about it.

The data, according to Google was collected during a 7-day period that ended last September 4, 2013 and was based on the Google Play Store app. The digits are pretty much leveled, with no surprise spikes and/or plunging ranks. 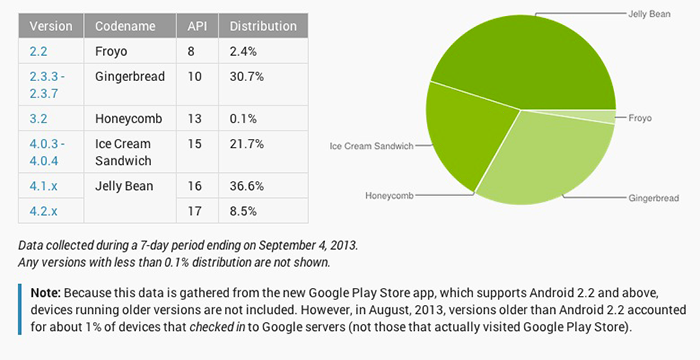 What are we expecting, then? Well, Jelly Bean’s numbers should spike once the multitude of JB gadgets start rolling out this Q3. Other than that, I don’t think there’s anything fancy about the numbers.