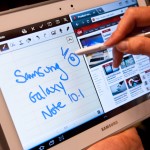 Following the claim of Apple during the iPad 3 unveiling that its A5X chip is 5x faster in graphics capability compared to the Nvidia Tegra 3 without showing any benchmark to support their claim and this resulted to questions. The Tegra 3 is the latest processor that is powering the Android quad-core slates and smartphones
Read More

There’s been whistling around that Google is currently building its very first Google Nexus Tablet. This rumored Tablet is very cheap that its price is almost half the price of current Android Tablet.  The first expected price was in range from 249- $299, and now reported from DeviceMag, the price should be around $149 – $200
Read More

Nvidia and its partner ZTE announced the pure Nvidia Smartphone - ZTE Mimosa X. This the first smartphone to be powered by all Nvidia technologies. The CPU+GPU is the Nvidia Tegra 2 SoC and Nvidia Icera 450 HSPA+ modem (14 HSPA+ with IceClear interference cancellation technology). Other than this is a pure Nvidia smartphone this phone
Read More

Motorola XYBOARD ‘WiFi only’ is now available for pre-order in the U.S. The Motorola XYBOARD has two versions, the 10.1 an 8.2. Both are running on a 1.2 Ghz processor, 1GB of RAM, Gorilla Display, 5MP-Rear Camera and 1.3MP for front. It is powered by Android 3.2 Honeycomb but Motorola will provide update for Android 4.0
Read More
Cyanogenmod Dev team is almost ready with their current project CyanogenMod 9 that is based on Android 4.0 Ice Cream Sandwich. In a video released by CM Dev team they successfully ported the CM 9 to HP TouchPad. The HP Touch Pad was discontinued because of low sale and HP stops developing the WebOS which
Read More